Evolution of a Classic Design

Last week, I mentioned 1956 Topps cards and left out how the look had been part of a three-year "evolution" as Topps perfected what many consider a great-looking design. In some cases, Topps even used the same photo as they went. Let's look at Hank Aaron's first three cards as a prime example: 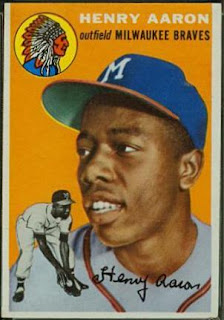 1954 Topps #128
In 1954, Topps went with a format that placed two pictures of a player against a solid-colored background. The larger picture was always a head shot, while the smaller one was a black-and-white action pose. 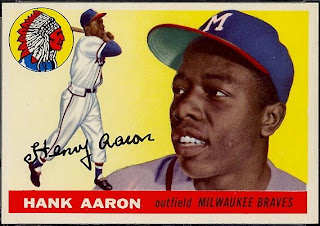 1955 Topps #47
In 1955, Topps used the same format, but made the cards horizontal, which made better use of the two picture format. There were a couple of other changes, though. The action shot was now in color, and the background was a solid color that tapered to white.

The facsimile player autograph remained, as did the team logo (a standard element of all Topps sets since 1952). And Hank is still staring over to the left side. 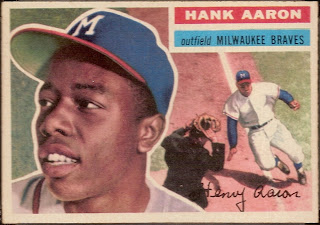 1956 Topps #31
Topps once again used that picture in 1956 and retained the two picture format. This time, however, the action shot was given a full-color background that gave it some real character. Let's forget for a moment that the action picture is actually an airbrushed picture of Willie Mays...but the format allowed for some tremendous "play at the plate" shots, as well as players jumping into the stands (like Mickey Mantle) and fielding grounders.

However, the team logos were gone, even as the facsimile autograph remained. And Topps had taken three years to produce a great-looking baseball card. That's not to say that the '54 and '55 designs were bad (they weren't), but the '56 was just improved. The only thing they could do to improve on that was to use full-color pictures...which they did in '57.
Posted by Chris Stufflestreet at 8:30 AM