I've featured a few cards in this blog over the year and a half I've been writing it that exhibit some of the means a young collector will use to make their cards as "current" as possible. Take this card for example: 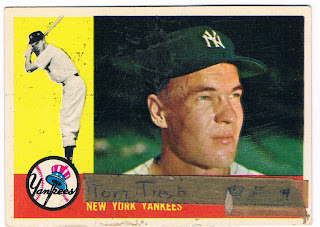 In 1960, Andy Carey was traded to the Kansas City A's, which was something like getting sent down to the minors for Yankee players at that time. In fact, the deal brought Bob Cerv back to the Yankees, so it really was like an internal roster move.

As a result, his cards weren't needed to have a complete Yankees team set. Tom Tresh, on the other hand, wouldn't get his own card until later, so his name could be written on a piece of tape that covered up Carey's name.

Interestingly, I looked over Tresh's career...he wasn't active as a major leaguer until really late in the 1961 season. He appeared on a first series Topps card in 1962, and never was a regular in the outfield (as noted on the card) until 1963. It looks like a previous owner didn't yet have Tresh's card from '62 or '63 and fixed that problem in a big hurry.
Posted by Chris Stufflestreet at 8:30 AM

Email ThisBlogThis!Share to TwitterShare to FacebookShare to Pinterest
Labels: 1960 Topps