A couple of weeks ago, fellow blogger Mark from Mark's Ephemera showed a scan from a 1962 issue of Life magazine that included two free cards inside. The card shown in that entry had Mickey Mantle, and here's the other one: 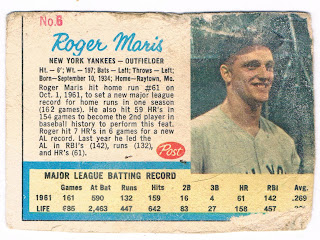 It's not in the greatest shape, but it celebrates what was a great season.

That issue of Life only included two cards, and all of them feature the M&M boys. As recently as the 1980s, it was possible to get an issue of the magazine with the cards still inside from a magazine dealer who didn't know they were in there. It's gotten a lot harder to do that once word got out about them. 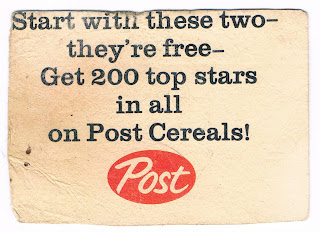 This can be seen on the insert in Mark's entry. So Maris was on the other side of the paper. "Regular" Post cards featured blank backs, and this one is made of thick paper rather than cardboard.
Posted by Chris Stufflestreet at 8:30 AM