The Mantle Rookie That Wasn't

I was straightening some stuff out and came across this neat little item: 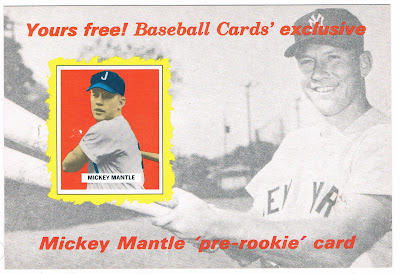 This was actually included as an insert into Baseball Cards magazine in October 1984. It was a mock-up of a minor league picture of Mickey Mantle that was designed to look like a 1949 Bowman card. The other side had the back: 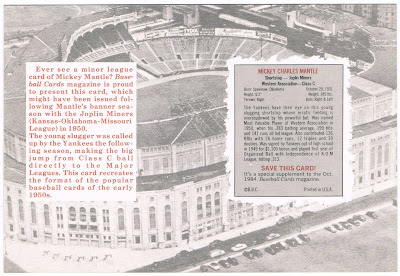 Fortunately, there was a line explaining that the card was made in 1984. There isn't a lot to stop somebody from cutting this up and trying to pass this off as an "authentic" but unissued/unnumbered '49 Bowman card.

I'm guessing that this was an early project of Bob Lemke, who was the editor of the magazine at the time and who still creates custom cards on his blog. I know Bob is an occasional reader of this blog; perhaps he'll leave a comment if this was truly one of his projects.