There was one really lousy thing about collecting Topps football cards when I was a kid.

They didn't look right. The logos were airbrushed off the helmets, and when I was young I didn't understand why the players on the cards didn't look like they did when they played on TV. 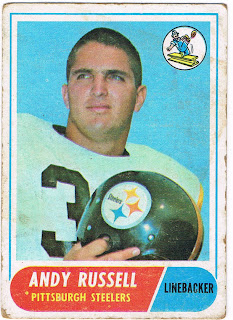 Andy Russell is posing helmetless, as most players of that era did. However, he's holding his "brain bucket" in his hands, and you can see the familiar logo.

In 1970, Topps lost its right to include NFL logos (including team logos) on its cards. It wasn't really noticed that year, as all the pictures used had players in positions without their headgear. In '71, only three cards needed to get the airbrush treatment; since none of the three were Steelers, I don't have one to show here.

In 1972, there was a subset of "Pro Action" cards and an increased commitment by Topps to show "game day" pictures...and they really stand out by how awful they are. And in the high-number set, here's one of the two Steelers: 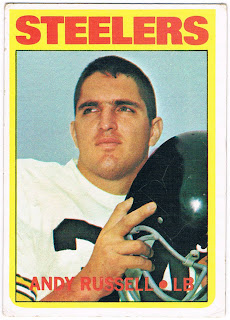 It's Andy Russell again, but the helmet in his hands has an ominous shadow right where the logo should be. And he seems to be inadvertently giving "the finger" to Topps as an expression of disapproval.

There was one other thing that needed to be removed from some of the cards... 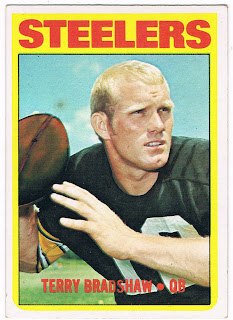 Take a closer look at the football in Terry Bradshaw's hand: 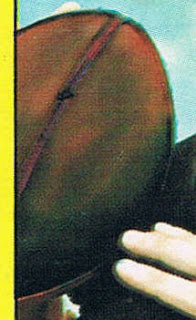 It's been airbrushed as well, in order to get the NFL logo off of the pigskin.

It would take until 1982 before the logos returned to Topps cards. It was a really long decade for football card collectors.
Posted by Chris Stufflestreet at 8:30 AM