A puffy envelope from Oklahoma City found its way into the mail last week. First of all...a big "thank you" to Jeff from Cardboard Catastrophes for the following: 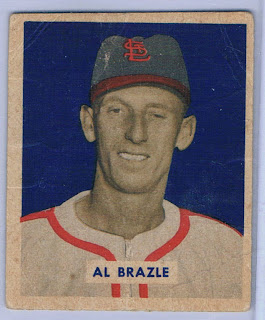 This card is from the 1949 Bowman set. It features Al Brazle, who was a native of Oklahoma...not far at all from the place the package was mailed. He spent seven years in the minors before finally making it into the majors late in the '43 season as a 29 year-old rookie and got into the World Series. Unfortunately, Uncle Sam stepped in and gave him another uniform to wear for the next two years. He returned to the diamond in 1946 and played in another Series. He stuck around until 1954, when he was 40 years old. 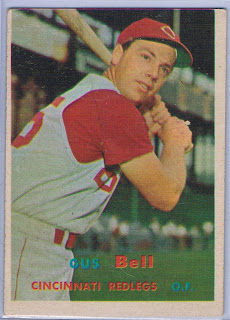 This card is from the 1957 Topps card. I don't care that it's miscut, because this one means I now have 132 empty slots in that binder. Since I still remember the days where I counted the number I had from the set rather than what I needed, I treasure every little piece of cardboard that gets me closer to putting the set to bed.

Not only that, but I remembered as a kid that Gus Bell was the father of Buddy Bell, thanks to his appearance in teh 1985 Topps "Father & Son" subset. He was also the grandfather of major leaguers David and Mike Bell. He passed away in 1995. 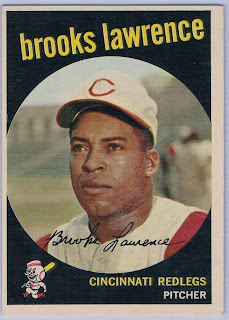 Brooks Lawrence was nearing the end of his big league career when this card appeared in 1959. He was another long-time minor league player who didn't get into the majors until he was 29. This card explains his nickname "Bull": he was always ready to go to work and his stats show that. He was used in the rotation as well as in the pen.

Brooks Lawrence has also retired to the Field of Dreams, being called up by the Big Guy in 2000. 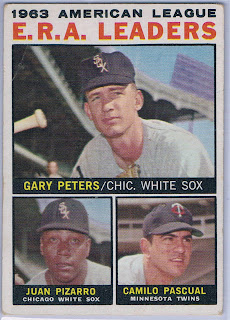 The 1960s was renowned as the "Era of the Pitcher," and it wasn't just the eventual Hall of Famers who benefited. In fact, the back of this card names the top 35 pitchers of the year. Only three would get into the Hall of Fame. Whitey Ford ranked seventh, Robin Roberts was eighteenth and Jim Bunning was twenty-ninth.

Thanks to Jeff for chipping some more cards off my wantlist.
Posted by Chris Stufflestreet at 8:30 AM