From the West Coast...

Here's a card that doesn't get much notice: 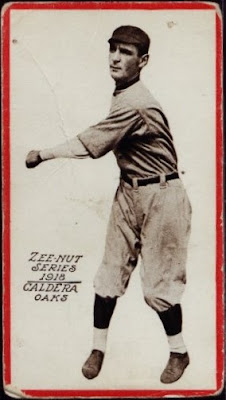 It really doesn't deserve to get overlooked, though. It's from 1918 and is part of a long-running series of Pacific Coast League cards known as Zeenuts.

Zeenuts were a candy made by Collins-McCarthy, a confectioner based in San Francisco. They issued sets every year from 1911 through 1939, which was the longest uninterrupted run of cards before Topps came along. That long run of cards made these very popular with collectors. They are classified as caramel cards and the E136 designation is given to every Zeenut issue between 1911-14, regardless of year and E137 refers to the sets from 1915 onward. This is confusing to some collectors, since another Collins-McCarthy set called Home Run Kisses also has an E136 designation.

It's relatively easy to get a "type" example of a Zeenut card, but the challenge is in getting a complete set. For one thing, they're tough to find in nice shape. For many years, a coupon was attached to the bottom that was good for a valuable redemption. As a result, many of those years' cards are found with poorly cut borders.

Some years are easy to identify by the date on the card (as seen above) or by their design, such as the red border above, which was only used in 1918. By the 1930s, though, it gets confusing because the year was dropped from the card. In those years, a detailed checklist is needed for many cards, and cards with the coupons intact -- with the expiration dates visible -- help to determine what card was issued in a certain year.

Since the PCL was very competitive, many of the players on Zeenuts cards went on to play in the majors and many Hall of Fame players are included. Early cards of all three DiMaggio brothers show up in the 1930s sets, with the family name misspelled "DeMaggio" on all of them.

They're worth checking out (as are Obak cards) as a reminder of baseball on the West Coast before the Dodgers and Giants moved there.

Another blogger (Nachos Grande) is doing a contest right now where a lucky reader can win scrapbooking software. Check out his post here.
Posted by Chris Stufflestreet at 8:30 AM