When you think of O-Pee-Chee, many think of Canadian-issed cards that were essentially bilingual versions of Topps cards beginning in 1965 and continuing afterwards. In fact, There is a blog called Oh My O-Pee-Chee that goes over the sometimes subtle differences among many of the cards.

However, O-Pee-Chee was making cards long before Topps was. Going through some of my old image files on my computer, I found this card: 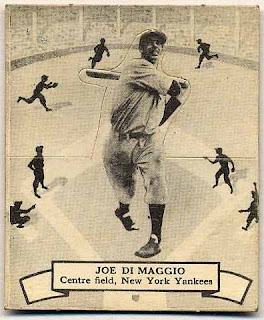 This card is from 1937, and represented the first baseball set OPC issued. It has the more "proper" spelling of DiMaggio's position than we Americans use, which gives it away as a Canadian issue. Joe D. appears to be playing inside a field, with players silhouetted in place as if a game were going on. There were 40 cards in all, and they weren't simply a variation of an American set.

However, the card is also die-cut, much in the same manner as the Batter Up set issued between 1934-36: 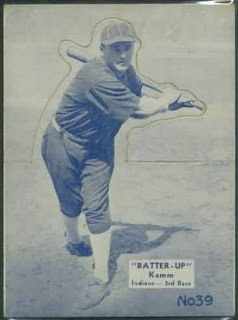 Personally, I like the design of the OPC cards better than the natural backgrounds used in the American set.
Posted by Chris Stufflestreet at 8:30 AM

Email ThisBlogThis!Share to TwitterShare to FacebookShare to Pinterest
Labels: 1934-'36 Batter Up, 1937 O-Pee-Chee