Over the weekend, I was contacted by a reader who found me through my Website. He asked me this:
(Removed...I was contacted six weeks after writing this blog entry and told to remove his email, even though I never named him, or even identified his city of origin. Basically, he bought a card from the Cracker Jack set and told me that it had been picked up from a seller who claimed it was taken from a box of Cracker Jacks while attending Buffalo Bill Cody's Wild West show.) 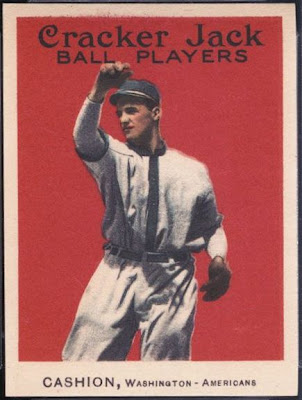 (This is the card in question. It's not his scan, but one that I grabbed on the Internet.)
Over the years, I've learned to be wary about any item that was accompanied by letters, notes, documents or other items that were meant to "prove" their authenticity. But, being the history buff that I am, I looked up some information and found out one little problem with the story he was given:

Buffalo Bill Cody's Wild West show went bankrupt in 1913 and ceased its performances at that time.

I sent him a polite reply asking for a scan of the card, and mentioned the historical discrepancy that picked his story apart. His reply:

(Once again, this was requested to be removed...he told me that the show came to town in 1911.)

And here's a copy of the note that came with the card:

(Removed by request of the sender...Permission to show it was refused after this was written.)
Nice. Verification that a show was held in 1911 still doesn't explain how a card from 1914 shows up there. Not without time travel or some type of science fiction scenario.
I got one more email from the gentleman saying that he checked further and since Cashion was active in 1911, it had to be an authentic card. His scan was too blurry to know for sure, but I'm still waiting for an answer about the type of cardboard stock or the edges (which usually answer authenticity questions with Cracker Jack cards). If he responds, I'll be happy to update this; in the meantime, it should be a warning to use due diligence in checking out any claims before you hand over your money for something that might not be the real thing.

I really want to hope it's just the effects of time mixing up certain details. As I'm getting older, I'm beginning to understand that the ol' mind isn't what it used to be. That's why I'm writing down what I know in these blogs.

(Update...which was written before this gentleman contacted me to remove the above items: I received a better scan since writing this and  it looks like the card is probably real. While I'll chalk this up to long-term memory recall issues, it is still a warning about relying on stories as the sole basis for buying a card.)
Posted by Chris Stufflestreet at 8:30 AM