Here are three cards that have found their way into my collection:

They are basic black & white cards and numbered 1, 2 and 3. Here's what the back of Gehrig's card looks like: 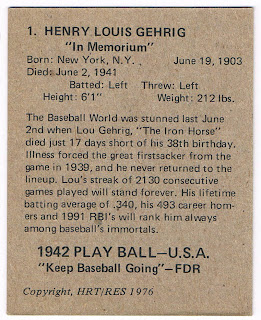 The 1976 copyright date allows collectors to realize these aren't really 1942-vintage cards. Rather, the initials HRT and RES were Ted Taylor and Bob Schmeirer, the two promoters of the "Philly Show" during its early days. These cards were designed to promote the shows and were a collectors' only set that imagined what a classic set like Play Ball might have looked like if it weren't for the interruption that World War II caused.

The funny thing about that...is that when I was working at Irv Lerner's table this year at The National, he explained that there actually WERE Play Ball cards in 1942. He said that the final series (#49-72) was printed along with the first 48 cards early in 1942 in order to keep cards on the shelves as the War effort claimed valuable resources that were needed to make gum and cardboard. That's why the high numbers don't have a 1941 copyright, and why some of the low series cards are sometimes found without one.

It's little titbits like that that made working at Irv's table so enjoyable. I consider myself to be fairly knowledgeable about vintage cards, but I realize there are veterans out there who have forgotten more than I could ever hope to know.
Posted by Chris Stufflestreet at 8:30 AM