Helping a Friend Out

I've mentioned Rob Fitts before in this blog and have plugged a couple of his books. He's an author who specializes in the history of Japanese baseball. He's also a trading buddy of mine who goes back nearly a decade.

Rob has written another one, which piques my interest because I'm a fan of history and a World War II buff. Here's the cover: 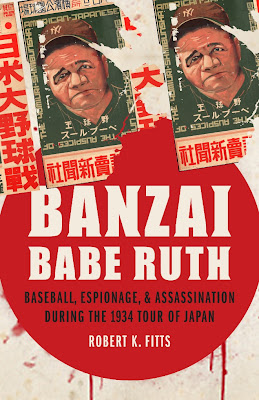 Here's a little bit about the book, from Rob's own Website:

"In November 1934 as the United States and Japan drifted toward war, a team of American League all stars that included Babe Ruth, Lou Gehrig, Jimmie Foxx, future secret agent Moe Berg, and Connie Mack barnstormed across the Land of the Rising Sun.  Hundreds of thousands of fans, many waiving Japanese and American flags, welcomed the team with shouts of “Banzai!  Banzai Babe Ruth!”  The all stars stayed for a month, playing 18 games, spawning professional baseball in Japan, and spreading goodwill.   Politicians on both sides of the Pacific hoped that the amity generated by the tour—and the two nations’ shared love of the game—could help heal their growing political differences.  But the Babe and baseball could not overcome Japan’s growing nationalism, as a bloody coup d’état by young army officers and an assassination attempt by the ultranationalist War Gods Society jeopardized the tour’s success.  A tale of international intrigue, espionage, attempted murder, and—of course—baseball, Banzai Babe Ruth is the first detailed account of the doomed attempt to reconcile the United States and Japan through the 1934 All American baseball tour."


This week, I received an email from Rob that said (in part):

"I’m asking you to please pre-order a copy of the book from Amazon in the next few weeks (or ask for it for the holidays).  Although you will not receive the book until March, a large number of pre-orders will help me greatly.  Publishers use pre-orders to help determine the size of a book’s print run and its advertising budget.  They also use the number of pre-orders to convince stores to carry the book.  So every pre-order of Banzai Babe Ruth will help me reach a wider audience once the book debuts.

"Besides, I think that you will really enjoy the story!"
Hoping to help out a fellow collector and author, I'm passing this on through my blog. I'm hoping that at least a few who read this can help Rob out as well. It looks to be an interesting story. Here's a link to the book on Amazon that will allow you to pre-order it:

The price above (at this writing) reflects a 34% savings off the list price of $34.95. Plus, if you buy it in conjunction with another Amazon product and push the total price above $25, it's eligible for free shipping. That's a great deal.

I'll write a review of this once I get my own copy.
Posted by Chris Stufflestreet at 8:30 AM