Far South of the Border

(This post was inspired by a collector friend who picked up some Venezuelan cards from the 1960s, including an album that held the cards. He shared a picture of the album with me but asked me not to disseminate them any further, as he is working on a book about the various Topps issues that were issued in that country. I'll honor his wishes...but if he finishes the book, I'll definitely plug it here. Anyway...the images here are not his; instead, I borrowed them from various Websites.)

It's time for the Winter League, where players head to South America to hone (or sharpen) their skills and keep playing even after the end of the World Series here in the United States.

Topps issued a number of sets in Venezuela beginning in 1959 but didn't cover every year. Many of the years, the cards were essentially gloss-free variations of its regular cards with a line on the back that mentioned they were printed in Venezuela (except for 1962, where the back text was written in Spanish). In 1967, there was a radical departure from the norm.

Cards #1-138 are made up of local players in the Latin Winter League and look like this: 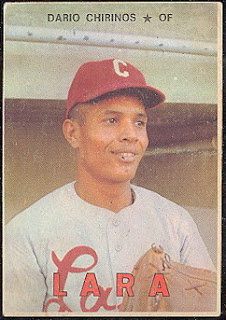 The cards follow a similar format to the regular 1967 Topps cards. The name and position appear at the top, with the city name of the player's team in large letters along the bottom. There is a star added in between those two elements, which is something not present in the '67 Topps set. The borders are much smaller, though, as the cards run a little smaller than the standard 2 1/2"-by-3 1/2" size.

The backs are entirely different: 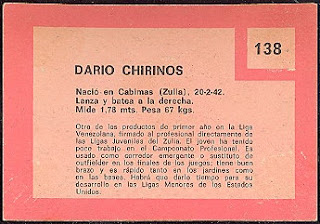 The cards use a horizontal format, contrasting with the vertical orientation of the regular set. There are also no cartoons or lifetime stats, and the text is entirely in Spanish. 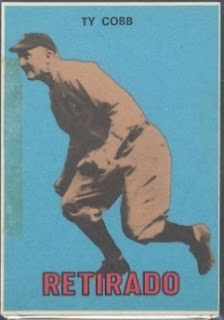 They even feature the Spanish word for "Retired" along the bottom. All 50 cards feature the player in a black-and-white image superimposed against a blue background. While many of the stars are Hall of Famers and players who played in the "Dead Ball" era, there are some more recent players included, like Sandy Koufax (who had retired the year before). Some Latin players get featured here as well (Alex and Chico Carrasquel, Minnie Minoso, Connie Marrero, Bobby Avila), and the card of Ted Kluszewski actually pictures Gene Bearden.

The backs follow the same format as the Winter League players' cards, but with a different color: 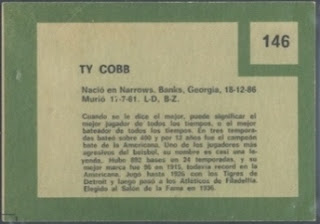 Instead of salmon-colored backs, these are in green. 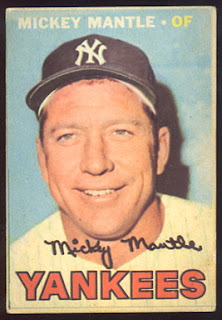 Except for the thinner borders, they follow the same design of their American counterparts on the front, including a facsimile autograph (which isn't present on cards in the earlier series). They also have a unique back color: 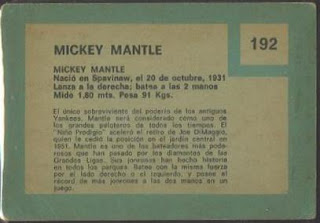 The backs of these cards are commonly found damaged because many were pasted into the album that was designed to hold them.

I'd love to show what that album looked like, but I've been asked not to share it. While I hope my buddy will eventually change his mind, the '67 Venezuelan Topps cards offer a glimpse into another culture where baseball is even more ingrained than it is in the U.S.
Posted by Chris Stufflestreet at 8:30 AM