One of the charges that has been leveled at Topps during its periods of monopolization over the card industry is the fact that many of its designs began to get generic -- some would say "stale" -- as the years went on. There is a lot of merit to that suggestion (and I really wish the Topps people could see this and take it to heart...but I am not going to hold my breath).

However, I came across this card during my current job of writing material for the Cardboard Connection Website: 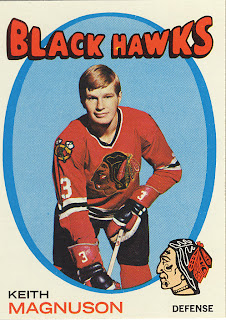 This is the design of the 1971-'72 Topps hockey set. It features a player picture superimposed over a solid-colored background and the set inside a circular "frame." The team name is designed to have an upward curve that really gives it the look of something you would expect from the early 1970s.

Here's what the back side of the card looks like: 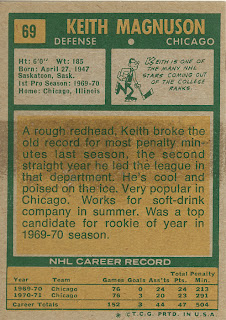 While better colors could have been chosen, there is a very important feature on these cards: for the first time, Topps used year-by-year statistics on the backs. For many years, they only used the stats from the previous season and only began adding the accumulated lifetime numbers in the 1969-70 set.

This was also the first year of these cards: 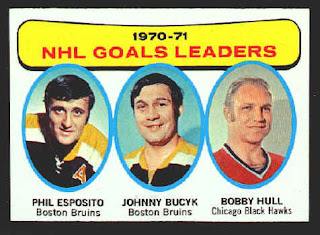 The first six cards of the set featured the leaders in several statistical categories. Topps had included a Leaders subset in its baseball sets for years; however, the other sports' sets were smaller and didn't get them until the early 1970s.

One card in the set was a checklist, which allowed the collector to keep track of all the 132 cards in the set: 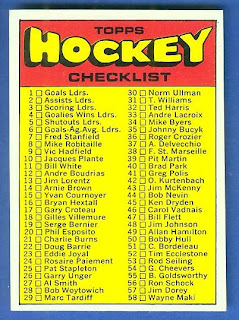 It uses the same curved design that was given to the team name on the base cards.

Ever since Topps and O-Pee-Chee had begun to issue separate sets in 1968-'69, the OPC issue was always larger and more "complete," while the Topps set was normally an abridged version. However, this year was a little different: the Leader cards above were only included in the Topps set, as was a base card of "Mr. Hockey," Gordie Howe. As a result, Howe's card is treasured even by the collectors who rarely venture away from OPC hockey.
Posted by Chris Stufflestreet at 8:30 AM