I recently received an email asking for advice on an eBay auction. The hobbyist wanted to get some information about the card and whether it was real or just a picture masquerading as a card.

Here's the image from the auction: 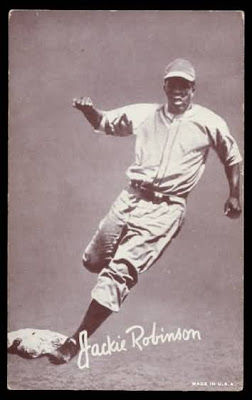 Funny how Jackie Robinson isn't shown in a Brooklyn Dodgers uniform. I'm guessing the picture was taken when he was a minor leaguer in Montreal in 1946 and airbrushed.

This Jackie Robinson card is from the Exhibit set. It was issued over a long period (1947-'66) and was essentially a set that changed its players over the years but kept the same design. I have written a page on my Web site about these:
Read about the set at my Web site
The card looks legitimate, but take care because it's known to have been reprinted. Also, set chasers need to be aware that most cards are fairly easy to get, but there are about 20-30 cards that will be quite difficult to get, since they were only issued for a year or two.
Posted by Chris Stufflestreet at 8:30 AM