For today's entry, I'd like to show off the 1948 Leaf football cards in my Steelers collection: 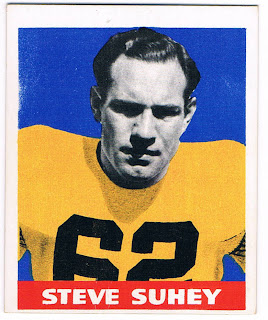 Card #2 -- Steve Suhey
1948 Leaf football was very similar in design to the company's baseball set that spanned the years 1948-'49. Leaf also issued football cards in 1949, but it was a different issue that contained players who also appeared in 1948. Fortunately a copyright date on the back makes it easy to tell which year the card was printed in case a checklist isn't handy: 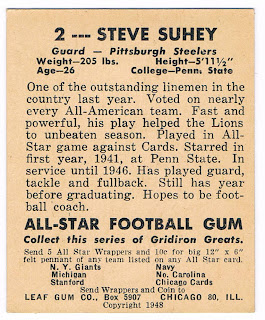 The 1948 Leaf set features several college players as well as pros, which is a nod to the fact that the schools were often on a par with the NFL in those days. However, the 1949 set featured no college players at all, and the players who were still in school during the '48 set are shown with their pro teams in '49.

There were three Steelers included in the '48 set. Besides Suhey, there was this player: 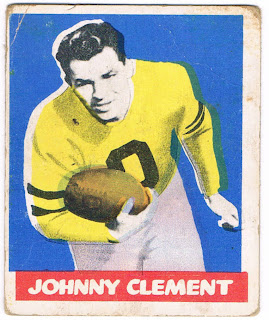 This card shows the registration issues that plague the set (as well as the baseball set). In many cards, the colors don't align properly and in some case, they're skipped entirely.

The last Steelers player in the '48 Leaf set is Ray Evans, who was included in the high-number series. Though the high numbers aren't anywhere near as scarce as they are in the baseball set, they're still difficult. As a result, the Evans card is still on my wantlist.

For some odd reason, there were no Steelers at all in the 1949 set.
Posted by Chris Stufflestreet at 8:30 AM