In the Interests of Equal Time...

My last post featured a card inserted into cartons of Coca-Cola. This time, we go to their main competitor and a very different part of the country: 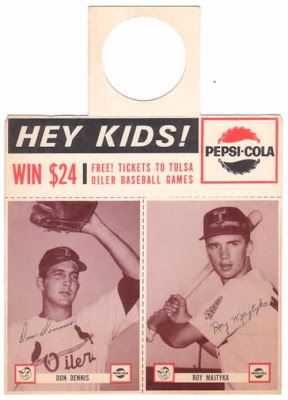 These cards were issued with cartons of Pepsi and feature players from the Tulsa Oilers. At the time, Tulsa was an affiliate of the St. Louis Cardinals and its manager was former big league star Pepper Martin. As it turned out, Martin was the only "name" in the set of 24 cards which includes two batboys.

There is a $24 reward mentioned in the panel above the cards. In order to win that, the collector needed to get the complete 24-card set and match them with the names printed inside the bottle caps. The collector could also redeem any 10 different cards at the gate for a ticket to an Oilers game on certain nights during the 1963 season.
Posted by Chris Stufflestreet at 8:30 AM