Are You Ready For Some Football?

With the NFL season now underway, it's a great time to look at a gridiron set of the past. 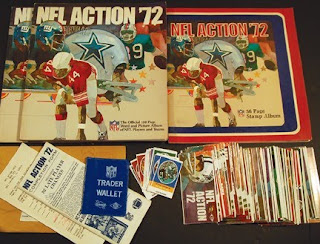 (The picture shown above was borrowed from this site, which auctioned off the lot shown above. The winning bid was $61.)
1972, Sun Oil Company (better known to us as Sunoco) did a promotion designed to spur sales and drive fans and collectors to their stations. Customers could buy two different stamp albums: one was a 56-page "Saver Album" and the other was a 128-page "Deluxe Album." The deluxe album was larger, but both were designed to hold all 24 stamps for each of the 26 NFL teams at the time. Each album included a "starter" set of 144 stamps, with six sheets of 24 stamps. Additional stamps could be obtained through books (several of which are seen above), which were given as a reward for a gasoline purchase.

There were several designs on Sunoco stamp books, but here's one from my own collection with a Miami Dolphins player featured: 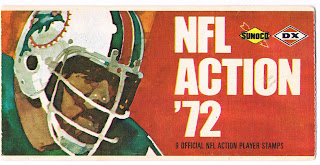 When this book is opened, it reveals a block of nine stamps. This one is in my collection because a Steelers player is included, but it also has Hall of Fame Rams player, FTD spokesman and Little House on the Prairie actor Merlin Olsen, who passed away earlier this year: 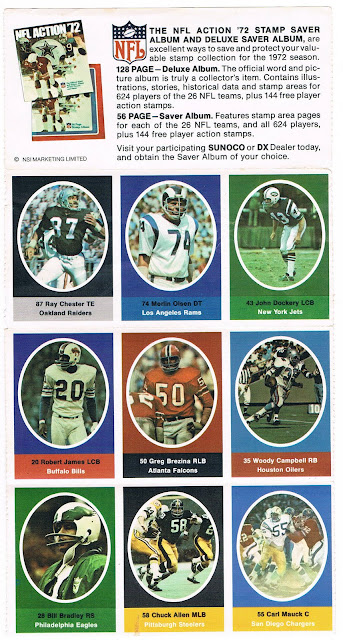 The block of stamps had this advertisement (which was also the back of the booklet cover shown above):

While showing what each stamp book looked like, it also gave some added interest for those who'd missed the promotion up to the point where they had been given the booklet.

With 624 individual players, the '72 Sunoco Stamps make up a much larger football set than any that had come before. At a time when Topps football issues were made up of 132 or 264 cards, the set from Sunoco was able to feature many players who never managed to appear on their own cards despite playing several years in the NFL. Since football sets usually focused on the glamorous positions like quarterback, running back, wide receiver or linebacker, linemen and others would routinely get left out of them.

Each team was represented by 24 stamps. There were 12 offensive players and 12 defenders per team, giving more balance than what would normally be found in football sets. As a Steelers collector, there are some familiar names: 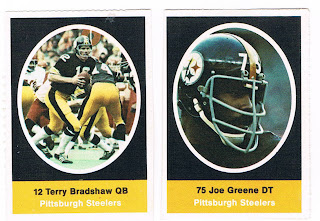 But there are also several names that don't exactly roll off the tongue, even among more rabid fans of the team: 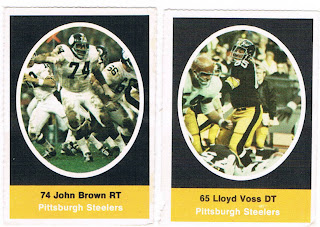 It's easy to forget that when the stamps came out, the Pittsburgh Steelers were still underdogs. They still had yet to win a playoff game in their nearly 40 year history and were only a few seasons removed from a brutal 1-13 showing in '69. They were still developing young players like Joe Greene, Mel Blount and Terry Bradshaw. Their luck was about to change: the "Immaculate Reception" happened in '72 and they began developing into one of the strongest teams in the NFL.

Whether due to a hoard of unopened material that was dumped after the promotion ended or the time-honored "back door" method, 1972 Sunoco Stamps are readily available, as the auction picture shown at the beginning of this article attests. They're not overly expensive, either. However, as a larger set, they present an excellent opportunity for team collectors to pick up players, especially ones who didn't get a chance to appear in any Topps or Philadelphia sets during their playing days.
Posted by Chris Stufflestreet at 8:30 AM

Email ThisBlogThis!Share to TwitterShare to FacebookShare to Pinterest
Labels: 1972 Sunoco