An Odd Choice of Picture to Use

One of the things that is neat about the 1951 Bowman set is the artwork. The cards in the set are artist-rendered color images that were originally black-and white, which gave them a very distinctive look.

And then there's this card: 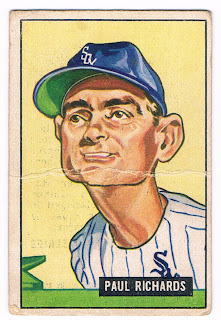 Card #195 -- Paul Richards, Chicago White Sox
This card shows White Sox skipper Paul Richards as a caricature. In a set that features such striking images, this looks like it was meant for the "funny pages" in the newspaper.
Posted by Chris Stufflestreet at 8:30 AM

Email ThisBlogThis!Share to TwitterShare to FacebookShare to Pinterest
Labels: 1951 Bowman